A day out on the Goldy

The Southport Spit and Broadwater are important assets for Queensland and, in particular, the Gold Coast. They form a key part of the Gold Coast's brand and image and offer wonderful recreational activities for the enjoyment of residents, visitors and tourists including adventure, sport, nature and eco-based tourism and commercial activities.

Historically, the public open space, waterways and parks on The Spit, Wavebreak Island and Broadwater have been the focus of inappropriate private, state government and local council development proposals such as: highrise mega-resorts and residential apartments (IRD); foreign casinos (GTH); and cruise ship ports and terminals (CST).

For decades, Gold Coast Community leaders and volunteer groups have successfully fought these proposals and eventually in 2017 convinced the Queensland Labor Government to implement a community driven Spit Master Plan to protect, preserve and maintain these "Jewels of the Gold Coast". www.saveourspit.com A multitude of exciting daytime activities are available on The Spit and Broadwater for residents, visitors and tourists owing to the campaigning, endurance and fortitude of Gold Coast community groups in the past and recent times.

Continue to Read Only If...

You would like to make an informed decision about exciting activities that you could enjoy while spending a day out on the Goldy.

A Brief History of The Spit

A spit is an extended stretch of beach material that projects out to sea and is joined to the mainland at one end. Spits are formed where the prevailing wind blows at an angle to the coastline, resulting in longshore drift of sand. This process often occurs where a river mouth meets the sea.

The Gold Coast Spit has been present as a natural form since at least the 1800's. It gradually moved in a northerly direction as the Nerang River silted up and then burst free to the ocean again. 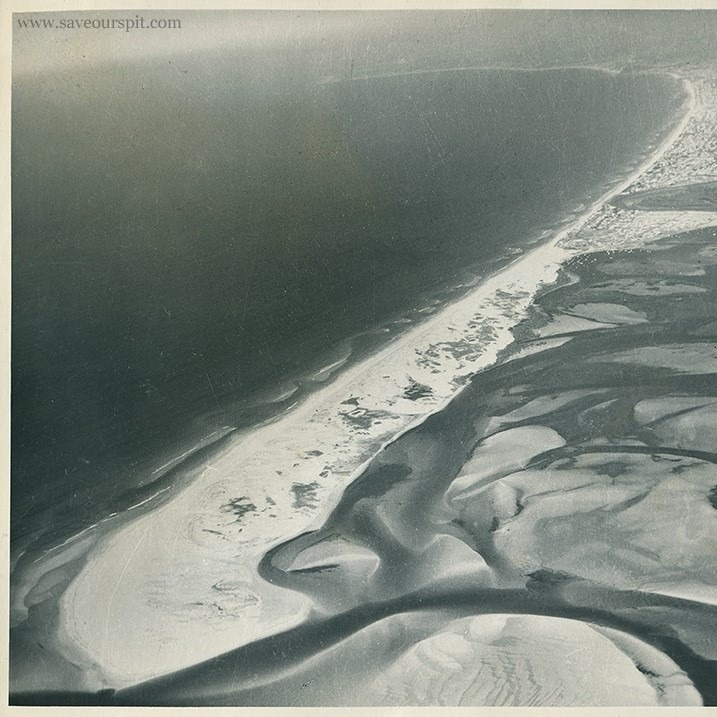 The Nerang River Estuary on the leeward side of The Spit is known as The Broadwater.

Over time the Nerang River mouth moved northward by up to 60 metres each year, causing land erosion and changing sandbanks at the bar and adjoining Broadwater.

Predominant south-easterly winds, the significant northern drift of sand and wave climate combines to move an estimated 500,000 cubic metres of sand along the Gold Coast and south-east Queensland coast each year.

It was estimated that by 2050, the Nerang River entrance would be opposite the northern Broadwater suburb of Runaway Bay if no action was taken, and the township of Currigee on South Stradbroke Island would be in danger.

It was already too late for Moondarewa, a coastal town near where Seaworld is located today. It was lost into the sea in the late 1930s during storms as the Nerang River entrance migrated northwards.

Prior to the construction of the Gold Coast Seaway in 1986, the northerly migration of the Nerang River entrance to the Pacific Ocean (locally known as the Southport Bar) had a history of instability.

Research revealed that with the magnitude of the northward drift of sand along the coastline, any scheme to stabilise the entrance would require a commitment to artificially bypass sand across the river mouth in perpetuity.

The Delft Hydraulics Laboratory of Holland had previously researched and reported on the beach erosion problems on the Gold Coast. In 1976 they presented a report to the Queensland Government which established a number of parameters which would be used in the final design of the scheme.

In 1983, the Queensland Government took action to stabilise the river mouth based on the studies by Delft Hydraulics.

Two breakwaters were constructed to form a new entrance through the Spit, just south of the existing entrance. The walls were designed to ensure they would be capable of withstanding the cyclonic conditions encountered on the Gold Coast.

Other model studies investigated the effects of wave penetration into the Broadwater and revealed the need to construct Wave Break Island on an existing sand bank to capture storm waves and protect the western foreshore of the Broadwater.

The Sand Bypass System was designed to mimic the natural flow of sand along the coast line and minimise impacts to the coastal environment. This world-first system involved pumping sand trapped by the southern wall through a pipeline under the seaway to discharge onto the ocean beach at South Stradbroke Island.

At the jetty, sand is drawn in by submerged jet pumps along the jetty pylons; this northwards drifting ocean sand is intercepted before it accumulates at the Nerang River entrance. ... The sand is then piped to the landward end of the jetty and 'delivered' through underground pipes back to the ocean north of the river onto the beach on South Stradbroke Island.
(adapted from https://gcwa.qld.gov.au/gold-coast-seaway-history/)

The Gold Coast has one of the largest boating communities in Australia. There are more than 40,000 registered watercraft in the city, which boasts the highest mixed use of watercraft of any location in Queensland.

Mark and Michael from Boat Hire Gold Coast use their years of boating experience to offer Boat Charters to Wavebreak Island and further north in the Broadwater to favourite day-spots such as Tipplers on South Stradbroke Island.

Wavebreak Island sits on the southern edge of the Moreton Bay Marine Park and hosts an incredibly diverse range of marine life.

Mark and Michael's charter boat, "Serrano", is a Seawind 1000, Australia's most popular sailing catamaran and it is built for enjoying the great outdoors in comfort and style.

The Gold Coast or "Southport" Seaway has the reputation as "the best inshore dive site of any Australian city."

Over 540 species of marine life (many of them protected, rare and endangered) have been documented and categorised by the Queensland Museum as inhabiting the Seaway and the waters to the eastern shores of Wavebreak Island.

Since 1986, the Gold Coast Community has fought against several proposals for the construction of cruise ship ports in the Seaway, Broadwater or off The Spit.

The tourism and recreational dive industry and dive schools operating out of the Seaway bring far greater economic (more than $200 million per year), job and tourism benefits to the Gold Coast without destroying the existing marine environment compared to any perceived benefits from a commercial cruise port that would destroy the current dive industry and marine ecology in the Seaway, Broadwater and in the ocean off The Spit beaches where the heritage protected Scottish Prince wreck is resting.

The Scottish Prince, 800 metres into the Pacific Ocean east of the Southport Spit, features the wreck of a three steel-masted, 64 metre iron barque ship. The Scottish Prince sank as it was sailing from Glasgow, Scotland to Brisbane with a cargo of whiskey, mousetraps, linen and other assorted cargo on 3 February 1887.

Also a purpose-built reef dive attraction is proposed for 3.5 kilometres south-east of the seaway and 2.5 kilometres offshore from Philip Park on The Spit, at a depth of 30 metres. It will be less than 20 minutes from dock to dive and will provide at least three return dive charters per day.

With an average of 220 offshore, good weather diving days per year, it is estimated the dive attraction when completed in 2021 will inject a further $32.8 million into the region's economy through more than 160,000 new overnight visitors to the Gold Coast with the specific intention of diving and/or snorkelling.

The Gold Coast seaway offers convenient access to the Pacific Ocean for those interested in deep-sea fishing and Fishing Charters.

The Scottish Prince attracts many boats early, picking up bait fish for their venture further outside in search of Snapper or other species.

Surf fishing from the beach is available along the 57 kilometres of Gold Coast beaches.

The Gold Coast Sand Pumping Jetty on the northern end of The Spit is a popular destination for fishers and likewise the southern Seaway Wall for those who do not own watercraft.

Also the GCCC has provided fishing platforms at various locations throughout the Gold Coast waterways.

The eastern side of The Spit is host to the 70 hectare, community-managed Federation Walk Coastal Reserve. The Coastal Reserve's vegetation is like a piece of Queensland's original Moreton Bay known by the traditional owners as Quandamooka Country before European colonisation and A stroll or mountain bike ride along the 3.5 km Federation Walk is a refreshing experience for tourists, visitors and residents as a change from the concrete-highrise residential and tourist accommodation zone just south of The Spit. The reserve is a safe home to a variety of iconic Australian birds, including the white-breasted sea eagle. And the once rare bush curlew is now a common sight on The Spit during the day and on the Broadwater foreshores in the evenings. (Robert (Bob) Westerman. Birds of The Broadwater and The Spit – Gold Coast, Australia. Wildlife Preservation Society of Queensland, 2014) http://www.saveourspit.com/No_Terminal/resources/Broadwater-Birds.pdf Birdwatching can be a very effective type of ecotourism. In general, the criteria for a tourism activity to qualify as 'ecotourism' are minimal negative impacts on the social and natural environment, maximum benefit for local communities, as well as positive conservation, education and economic effects.

The number of whales swimming up and down the coast between Antarctica and Queensland has tripled to 30,000 since a whaling ban in 1979, turning us into a nation of whale-watching fanatics. Now tourists are flooding to join us.
https://www.traveller.com.au/soaring-numbers-point-to-a-whaleled-tourism-recovery-gy72di 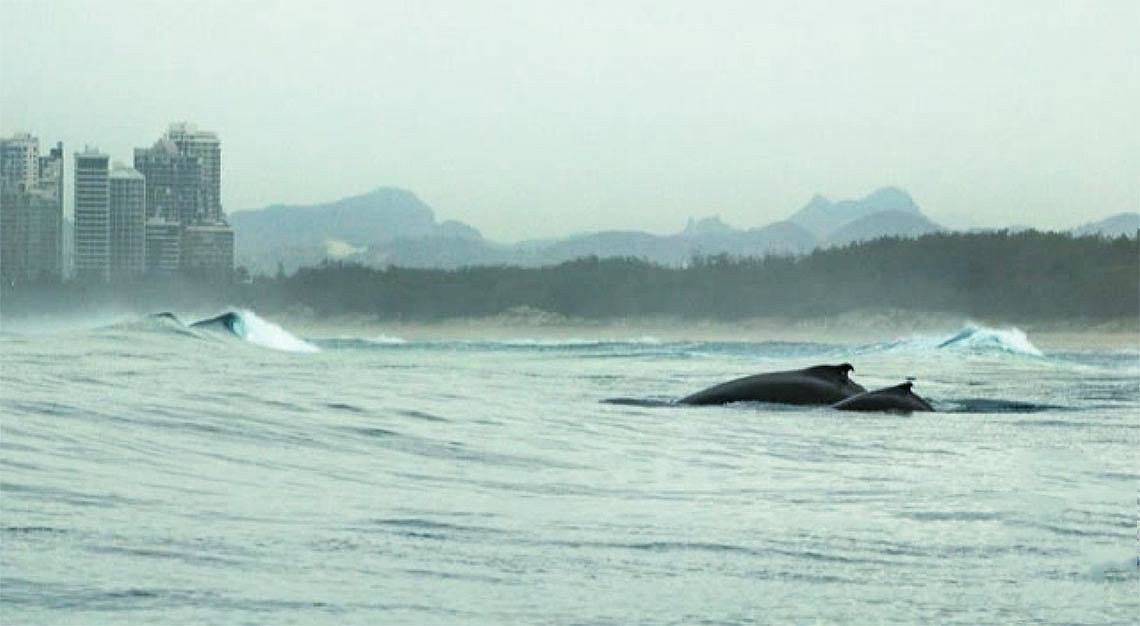 Gold Coast residents and tourists have enjoyed the spectacular performance that whales put on in the waters just off the city and occasionally inside the Seaway every June and July as well as later September and October, in their migratory passage close to the mainland.

The presence of the whales is yet another reminder of the natural beauty and wonder of the Spit; something that no government and no developer has the right to take from the people.

In recent times, the waters off the Gold Coast's beaches have increasingly become a birthing site and nursery for migrating humpback whales.
ABC: Humpback Whales Birthing Off Gold Coast

The Gold Coast is famous for its world-class surf beaches. So much so, that its southern beaches were classified in 2016 as one of only 8 World Surfing Reserves on the planet.

Surfing on the easily accessible 35 kilometre stretch of Gold Coast surf beaches is equally available to residents, visitors and tourists.

Gold Coast surf beaches have been used by World Professional Surf organisations since the world circuit began in the 1970s. And the Gold Coast has produced more male and female World Surfing Champions than any other Australian location.

In 2008, the City of Gold Coast invested in a study into the 'socio-economic value of recreational surfing'.

A conservative estimate (taking into account inflation and increases in surfing population) of the 2019 financial contribution to the Gold Coast economy by resident and visiting recreational surfers was $186 – 335 million for the year.

Over one-quarter of surf sessions and annual expenditure by recreational surfers on the Gold Coast is spent surfing the four northern-most ocean beach locations adjoining The Spit and Broadwater.
http://www.valueofwaves.org/uploads/1/1/4/2/11420190/lazarow_2008_final_report_socioeconomic_study_of_recreational_surfing_on_the_gold_coast_lowres.pdf

The Spit, Broadwater, Wavebreak Island and Seaway offer adventures, experiences, activities and accommodation that are unique to the Gold Coast.

Enjoy your day out on the Goldy.